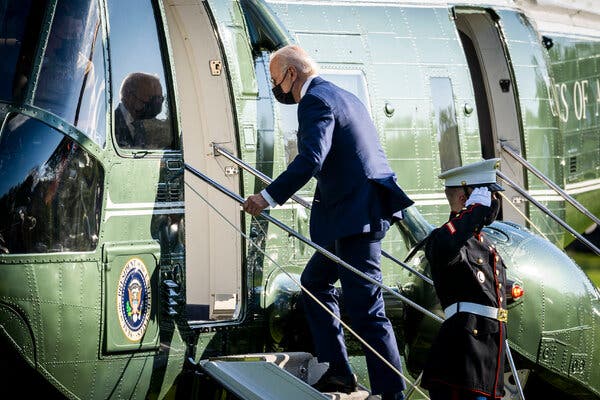 Over the weekend a certain Senior Citizen went missing. For nearly 3 days he was not heard from. From early Friday afternoon, until mid-morning Monday, but for one brief phone call, he was gone.

Now ordinarily I'd suggest that we call the police, begin a search party. But in this particular case, we don't have to worry. This Senior is always surrounded by the hired help. You know, the Marines, Secret Service, and aid-de-camp that keep the resident of 1600 Pennsylvania Avenue, company.

Because this particular Senior Citizen also happens to be the President of the United States. And Before Joe Biden, I didn't realize that the Presidency was a part-time job.

No doubt Biden was taking some days off to prepare for tonight’s State of the Union address. An affair that's become routine in its formulaic recitations. Political points for his party, jabs for the other side.

So tell me, anything happens over the weekend that Biden may have missed?

Only the threat, aimed at this country, of thermo-nuclear war.

Ironically this isn't the first time we've come up against the Russian Bear, in a time of global crisis. It's almost 60 years to the day, that another American President was also faced with a major Russian, or as they were known back then Soviet Ultimatum.

Like Biden, John F Kennedy was relatively new to the job. Having been elected just a little more than a year before. While the Russian leader Nikita Khrushchev was an old hand on the world stage.

In a bold move of aggression, Khrushchev had begun to put Intercontinental Missiles into Cuba. A place so close that the US had no defense, should he hit the button. The US would be put in perpetual servitude to the whims and wishes of Russia, should they succeed with their plan. It would be blackmail taken to a new level.

Kennedy rose to the occasion. He immediately understood the threat and determined to meet it. The US Armed Forces around the world were put on their highest alert. Soldiers, Airmen, and all the ships at sea were expected to react to any further Russian aggression at a moment’s notice.

The President, who was also out of town, quickly flew back to Washington gathering around him his cabinet, the joint Chiefs of Staff, and selected analysts to devise a strategy. Ultimately it was decided that a US blockade would be the most prudent, and least likely to cause direct provocation.

So it was that Cuba was cut off from any further shipments of Russian missiles.

Khrushchev turned his ships back to Russia, withdrew those missiles already in Cuba. And the world was once again at peace.

But it was a very close call. And most historians agree, was perhaps the closest the world came to all-out Nuclear War.

Averted by a fast-acting and decisive President.

Contrast that with today.

The Russian behavior is eerily similar to those many years ago. Russia is belligerent. Commanded by a man who many in the west consider unstable. Remember Khrushchev taking off his shoe to beat his desk at the United Nations?.

Today most of the American Press portrays Vladimir Putin in much the same way as Khrushchev. And that may be true. But it makes the egregious actions of our own President all the more negligent.

If Putin is unstable, it's all the most reason to engage him. Communicate, take visible action to try to deter his sinister goals. Hiding in New Castle Delaware will only enrage Putin further.

But my worst fears are that's exactly what our President did this weekend. Hide in Delaware. No doubt preparing for tonight’s speech. Looking for those combinations of words, that phrase that will place him in the history books.

History was here this weekend. When one of America's major opponents threatened all-out war.

But Biden took the weekend off.

For Biden, History called this weekend. But there was no answer.

There was an old television program called Star Trek. In one of the shows, some members of the crew were accelerated to unimagined speed. Darting aroun…

For many years the best indicator for the fortunes of any country has been the relative value of its currency. And the International Foreign Exchange M…