I'm a finance guy. Strictly dollars and cents. It's a world that I'm comfortable in. None of these wild appeals to emotion. No yelling and screaming. Just the facts, as we like to say around here.

And it's from that perspective, that I view Moderna as such a mystery. This is a company that should be riding high. On top of the world. It's this company, along with Johnson and Johnson and Pfizer, who have developed the medication for the worldwide plague, Covid, in its various iterations.

Imagine: having the “cure” to a desperate disease that potentially all of mankind is subject to. You can sell your “vaccine” to literally everyone on earth. As Bill Gates reminds us, that's over 7 billion people. And what's more, not just the initial does, but all of the subsequent boosters you can also sell.

And just adding the cherry on top, your customers aren't just the individuals involved. No. Your customers are the various Governments around the world. Paying upfront. It is an accountant's dream.

A product that everyone needs. Sold to governments with impeccable credit. All Paid for upfront.

Life for Moderna must be wonderful.

So why is it that Moderna's stock keeps falling in price? And not just a little bit. Since peaking in value last August, it's been an eight-month decline of tremendous magnitude. 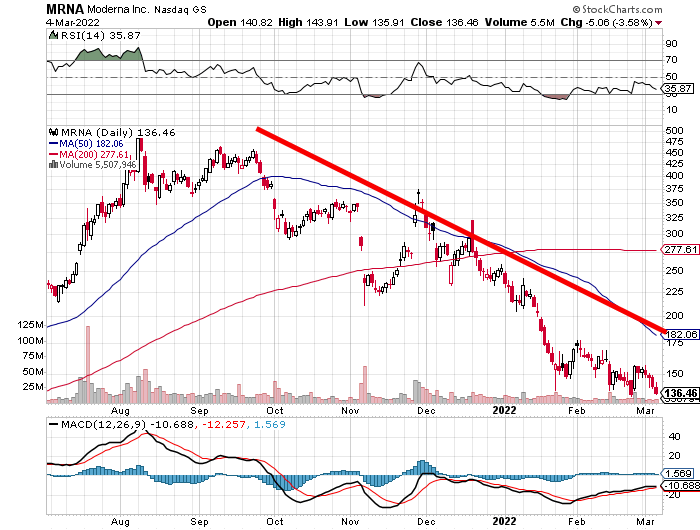 And that's real money. You can bet that lots of investors are hurting right now, all because of Moderna. Traders have taken losses. Funds, mutual, hedge, private equity, all have had to price down their portfolios because of Moderna's decline. And individual investors are all wondering how this “can't miss” deal, is costing them.

A loss of this magnitude doesn't just happen out of the blue. There's a reason for all of this. And I decided to take a look into just what's happening to this former darling of Wall Street.

Here are three things that I've found. It may not be scientific. But sometimes when you're losing your shirt, you can't wait for the science before you pull the ripcord.

Moderna Mystery Number 1. The most highly vaxed, those who have received their third booster, seem to have a higher death rate, than the un-vaxed. Both Hong Kong and Isreal, two of the most highly vaxed population on earth, are currently experiencing a surge in deaths among those with triple vaccinations, reports the New York Times.

And in a recent study from the United Kingdom's Health Security Agency, there were over 3,500 who were fully vaxed, yet died from Covid. While fewer than 400 who were vax free died from the disease.

In other words: for weeks 5 through 8 of 2022, nearly 90% of the Covid deaths in England were from the fully vaxed.

Mystery number two. Now, this mystery is not, strictly speaking for Moderna. It's inflation from Pfizer. But, the technology is essentially the same: a gene-based therapy.

Recently a group of concerned public health practitioners, called “Public Health and Medical Professionals for Transparency” sued the FDA, under the Freedom of Information Act, to obtain the records of Pfizer's application for approval of their vaccine.

Normally, these records are readily available to the public. But Pfizer has succeeded in having them withheld from the public. These doctors sued and won. And last week some of the Pfizer records were released.

Literally, thousands of pages are now available for review. And no doubt much will be revealed. However the most pertinent for investors right now centers on whether or not the Covid Vaccines can affect human DNA.

For months the CDC and others, have claimed that the vaccine will have no effect on human DNA. You may recall discussions claiming that the “shot” remains in the shoulder.

The data from Pfizer's own studies seem to indicate that the vaccine can indeed move to other sites with our bodies. And with certain adverse effects. The Pfizer data was recently reinforced by a study from Lund University in Sweden which showed the vaccine mRNA moving readily into liver cells.

Taken together this data would indicate that the vaccine does not remain in the shoulder. And that further may have an adverse impact on other internal organs.

Moderna Mystery number 3. In the most damning of all indications that the Moderna Vaccine may not be as Safe and Efficacious as the CDC, FDA, and others have indicated.

Mystery Number 3. In the February 21st Edition of the Scientific Journal Frontiers in Virology, a group of international scientists has claimed to have found the exact DNA sequence in the Covid Virus, that Moderna had patented three years before the outbreak.

This of course is explosive. And while it has not yet made the American news, there are articles in the Daily Mail over in England that do report on this. So, there you have it. My answer to why the stock price of Moderna has taken this mysterious turn down.

Sometimes the stock market is like the alchemist's fire. Separating the gold from the dross. My hope is that using the perspective of finance, may help us all see these issues a little more dispassionately, a little clearer.

I grew up in Santa Barbara, California. A town with a rich Hispanic heritage that goes back to its discovery by Juan Rodriguez Cabrillo in the 16th centu…

At 2 o'clock this afternoon, eastern time, the Federal Reserve will announce its latest move in interest rates. Their objective is to curb this runaway i…